We went to visit the school and meet the 5th grade students early in the semester. Both 5th grade classes were in one classroom (some sitting at their desks and some sitting on the floor) and we stood at the front of the room. We introduced ourselves and our project to a very excited group of students, then toured the park ourselves in order to have exposure to what students would be discussing with us in the following weeks. Our plan was to interview the students in two separate phases of research: one being mental mapping, and the other being photo elicitation. 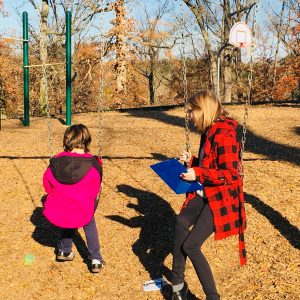 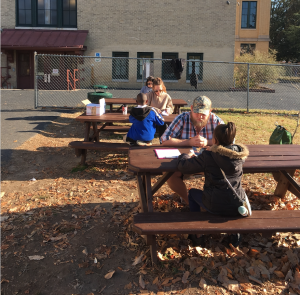 To begin gathering data, we interviewed 25 students about the park, what places and activities they liked, and what places and activities they didn’t like. We had met students before as a group and we let them choose who they wanted to do an interview with. They chose based on hair (one of us dyed her hair the day before, another has very cool braids, both men have beards), shared names, color of clipboards and other fairly superficial, but sometimes strongly felt, affinities.

We sat down with students individually outside and asked them to draw what they would show us if we went to the park or to draw within an outline of the park.  The results varied greatly, from some students drawing only their favorite place in the park, to others drawing complex and detailed maps that incorporated elements from outside the boundaries of the park. Researchers interviewed students either as they were drawing or after they were finished drawing.  In the interviews we asked students to reflect on what places and activities they liked most and least, what they remembered from other grades at school, and if they ever went to the park outside of school. Some interviews generated lots of detail and stories and other didn’t. The interviews lasted between five minutes and thirty minutes. Sometimes we talked (maybe too much) because we were interested in engaging with the students. Sometimes the students talked a lot, maybe because they didn’t want to go back to class. We each did between two and four mental mapping interviews. The interviews were recorded, and later transcribed and coded. The maps themselves and the transcribed interviews form the core of our project.

During the transcription process, we generated a list of key words and ideas in the interviews.  We made a coding chart to see what places, things, and activities were mentioned by students, as well as the stories students told and the emotions they expressed about the park  This coding process allowed us to see what features of the park students like the most as well as what features we were surprised to see missing. Through discussion and debate among ourselves, we were able to formulate further hypothesis and excitement for the project grew.

Photo elicitation formed the second phase of our project. As we were digesting the data gathered through mental mapping, students were taking pictures of places they liked to play using cameras they got the week after the mental mapping interviews. Much like the mental mapping process, we received extremely varied photographs taken by the students. Some photos were obviously taken by an excited student who took pictures of every “cool” or “beautiful” thing they saw on the way home, while others were more methodical in their process and produced a variety of environments to later discuss. We met for more interviews, this time revolving around the photos, where the student would select their five favorite photos and the researcher would select their five favorite photos (with overlaps allowed) to be discussed. (Some interviews talked about all the photos, though.) These interviews were also recorded and then transcribed, with the transcription process again revealing rich new questions and answers alike. We each did between two and four photo elicitation interviews.

The data gathered through photo elicitation and mental mapping was related and yet intrinsically different. Photo elicitation allowed students to express themselves more, since they were free of the limiting instructions to “draw the park.” Their photos were constrained by their ability to travel, which admittedly is a large limitation for many 5th graders, but within the range of their every day experiences, the student had control over what photos they took to share with the researchers. (They were also constrained by their friends taking their cameras and taking pictures and their general lack of familiarity with disposable, non digital, cameras, so many of the pictures were “accidents” or very dark and hard to see.)

We were offered pictures of ponds, construction sites, motorcycles, trees, animals, family heirlooms, and more, all of which gave us insight into what features of the city interested students as well as what was important to them. Ultimately what we had was a complex and fragmented picture of the city shared by these children. We discuss them here and you can explore them all here.