The city has a highly segregated and unequal school system. A couple of schools are seen as very successful, with high passing rates on standardized tests, low rates of students in poverty and higher percentage of white students than the city has white residents. More schools have low passing rates on standardized tests, poorly maintained buildings, high rates of racial isolation, and high numbers of students in poverty. In addition to a handful of successful majority Black elementary schools, the school system has two elementary schools that are about 1/3 white (compared to 40% of the city’s population) and that are seen as “good schools.” One is zoned school that serves adjacent neighborhoods that capture a racially integrated student body. The other, our study school, accepts students from across the city through a lottery system; it has no zoned students. Presumably all parents who apply for the lottery feel that this school is better than their neighborhood school, either because it is smaller, has (just barely and only recently) passing scores on standardized tests, feels very safe, is racially integrated, or because of its curriculum which includes a focus on science and art and going into a big city park that is adjacent to the school for some time every week.

The park is a pretty great park, with rugged trails used by mountain bikers and hikers, a creek that runs into a small man-made lake, several open areas including sledding hills that attract people from neighborhoods far and near after a good snow, old stone bridges and other built features.  It is an appealing mix of overgrown and manicured outdoor spaces. About a century ago, the city Parks Department gave a corner of the park to the school system, which established a school there. The school was closed when a newer building was opened and neighborhood parents and residents argued, eventually successfully, that the old building should be reopened as a school rather than to be left derelict.

It is a relatively young school in an old building. In recent years the administration has tried to sustain its upper grades by having more Kindergarten and 1st grade classes that can feed into ever smaller grades. The total number of 2nd and 3rd graders has often been about 70% of the total number of K and 1st graders and the total number of 4th and 5th graders is often about 70% of that. In other words, the school loses some students from grade to grade and does not replace all of them. (This attrition might be slowing.) In the lower grades white and Black students make up comparable numbers of students, but by 4th and 5th grades the student body is majority Black. While both white and Black families leave the school for a variety of reasons, white families leave at a higher rate.  White parents seem more likely to leave the school as a way of opting out of standardized tests and they either home school or send their children to private school after leaving.

The school as a whole is less than 60 percent African-American and more than 30 percent white and almost 10 percent biracial, Asian and other.  However, the grade cohort that we studied was about 75 percent Black students, who were pretty evenly divided between girls and boys, and just over 20 percent white students, with three times the number of girls than boys. Because the population is small, the disproportionate number of white female students could be random.

We sent home consent forms to all 33 fifth graders.  At the beginning of the week that we were planning to do our first set of interviews, we had something like eight returned. 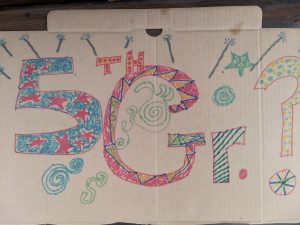 By standing in the drop off lane handing out and collecting additional consent forms from parents waiting to drop off their students, we made it to thirteen, the day of our interviews we had over 20 consent forms and after a couple of students had teachers call parents for oral consent, we had 25.  Over the semester, a few more consent forms trickled in, so that we ended the semester with 29 consent forms.  The ones that came in late were not included in our mental mapping interviews.  Every student received a disposable camera and minimal instructions, essentially to “take pictures of places that matter to you.” If they returned their cameras and had a consent form by mid-November, they were included in the photo-elicitation interviews.

We conducted 25 mental mapping interviews about the park and 26 photo elicitation interviews. These interviews included about 75 percent of the 5th graders in the school.

Our sample included fourteen Black students (ten female and four male), six white students (four female and two male), and seven students whose parents asked that we not use their race or gender OR whose identity might be revealed if we included the demographic information that parents included. (See the methods page for more information about what we did.)