Our Interpretations of Student Maps and Interviews

Quantifying the qualitative data collected during mental map interviews began with the creation of a master list of Park features that were drawn by students. Researchers then coded each individual map by assigning a ‘1’ when a feature was present on a student’s map and a ‘0’ if the feature was not present. This gave us a frequency count that showed what percentage of students drew a particular park feature. Table 1 shows the frequency counts of park features on the master list. 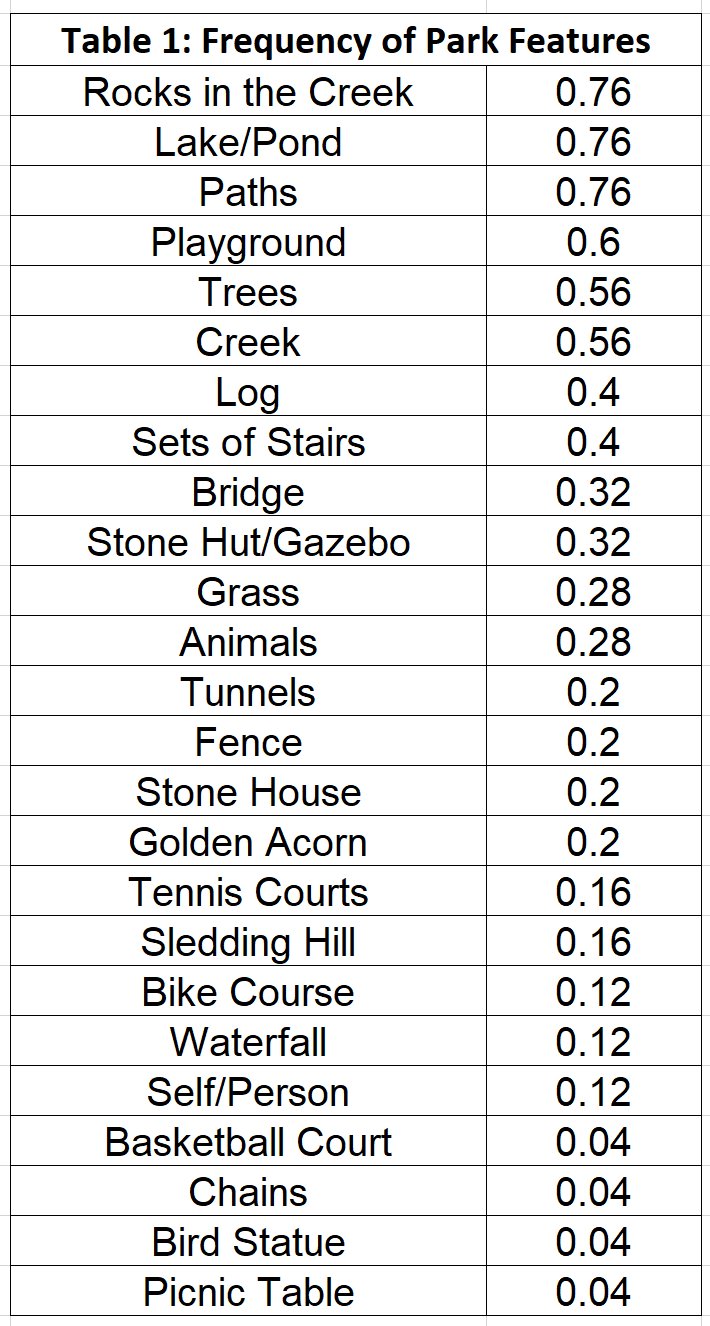 Researchers used the frequency table to identify features that could be mapped and constructed two maps, one focused on locating places mentioned by students and the other focused on frequency (see below).  (Some students drew themselves in the park, but we couldn’t map them, obviously.  The bird statue doesn’t actually exist in the park, despite being mapped by one student, so it couldn’t be located on a map.)

Some features are not points (paths) or are multiple points (stairs) and we chose to aggregate and locate these features in one place.

The map suggests that students most frequently mapped features closest to the school and included more distant features, including the stone house and the farmer’s market less often. 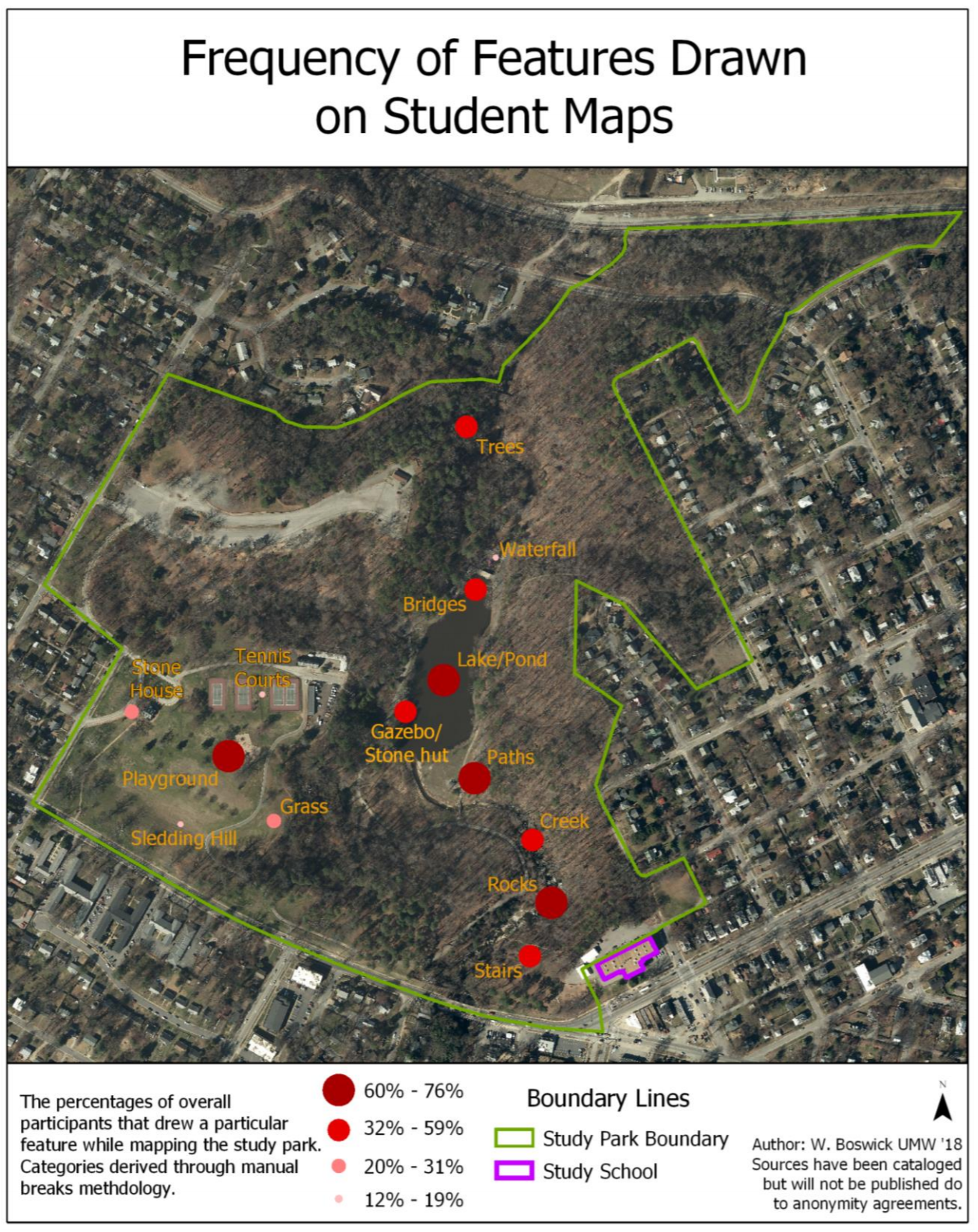 The data gathered from interview transcriptions varied from the data gathered from the drawn maps. Students were quick to talk about their park experiences, but were less willing (or able) to draw them. In addition to coding interviews, looking for patterns in what students discussed, we created a word cloud to visualize these rankings. The larger a word or phrase is in the cloud, the higher its frequency of mention in student interviews. 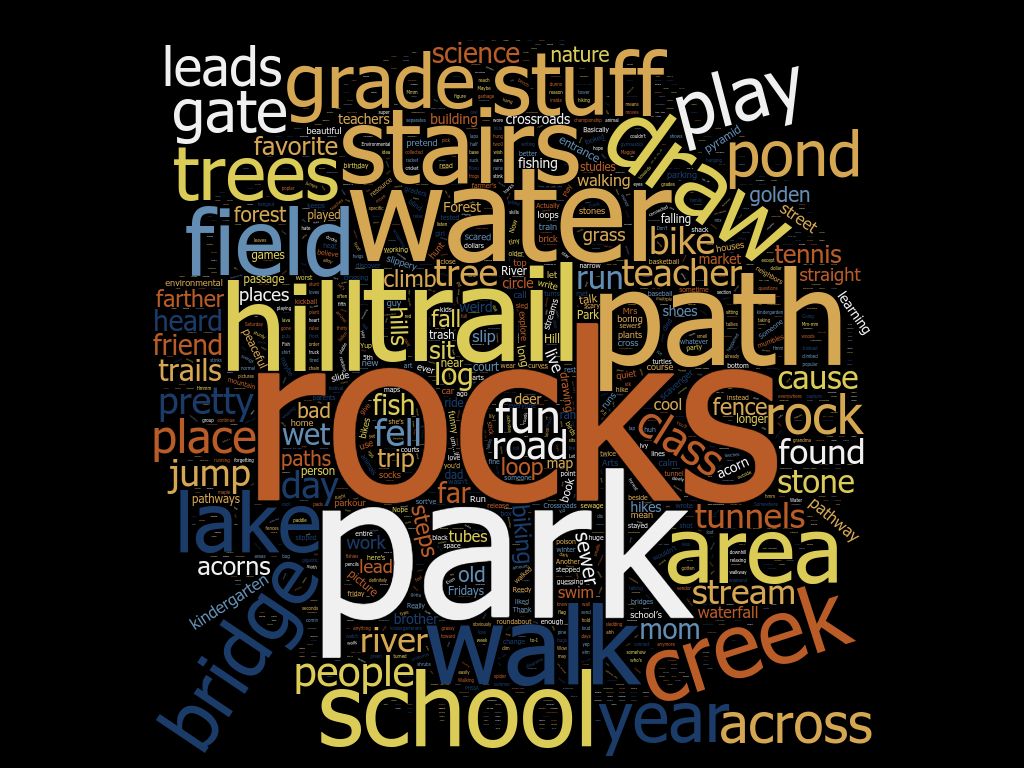 We wanted students to affirm (or not) our analysis, so we returned to the school to conduct focus groups.  We showed students the frequency map, the word cloud (seen above) and a table of frequently mentioned places and activities.  We also asking for clarification about certain park features.  We confirmed that the ‘waterfall’ feature was correctly placed on map 1 and reaffirmed earlier conclusions about the bird statue.  Students in one focus group were intrigued that more students drew the rocks in the creek than the creek itself.